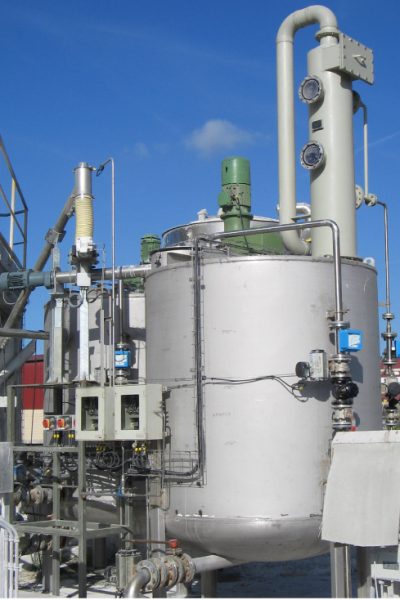 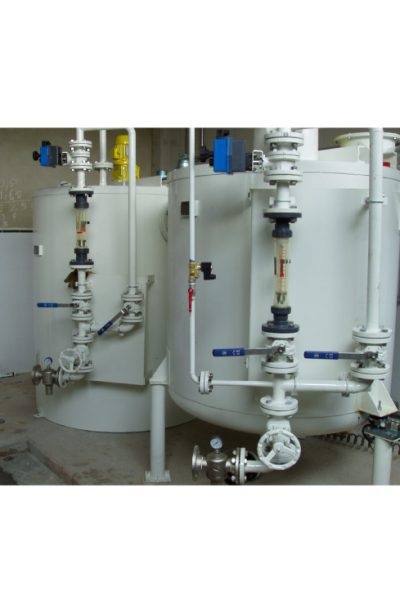 The SODIMATE calcium oxide shutdown system has two different zones, one for shutdown and the other for dilution.

The equipment is designed to work in continuous operation mode using two tanks. As the lime is extinguished, it overflows in the second and thus thinning.

The lime is dosed into the first tank, called the shutoff tank, thanks to Sodimate, ZCD400 or DDS400 equipment. Between this equipment and the tank, a guillotine valve is fitted so that when the equipment is not in operation, moisture is not absorbed by the product inside the dispenser and thus avoid clogging.

The water is introduced at the same time as the lime. The mixture is removed by a stirrer. The volume of the shutoff tank is designed to provide a retention time of about 20 minutes. After this time, the mixture overflows to the second tank, dilution, by a tube diver.

In the dilution tank, the rest of the water will be added to reduce slurry’s concentration. In addition, the tank is oversized to provide a reserve volume in case of any unforeseen circumstances.

To remove the sands, the decantation method is used: The agitator’s mission is to remove the mixture in such a way as to ensure a good mixing between the lime and water particles, but at the same time allowing the heavier solids to precipitate. The bottom of the first tub is a klopper bottom, with a manually opening ball valve. The function of this valve is to be able to purge the equipment and remove the decanted elements.

Reduced reagent consumption
Economic interest in the use of quicklime instead of hydroxide is a saving both in terms of the price of the product and of transportation, since hydroxide’s density is 0.45 kg / l and that of lime 0.9 kg / l.